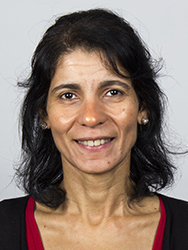 Ms. Paez works at the International Telecommunications and Internet Policy Directorate of the Department of Innovation, Science and Economic Development Canada (ISED) since 2015. As Senior Policy Analyst & Team Leader, she manages the team on Internet Governance and Domain Name Policy. In her role, she develops and advances the Canadian government's policy positions at the Governmental Advisory Committee (GAC) of the Internet Corporation for Assigned Names and Numbers (ICANN) and other international fora. Since 2017, she has been the Canadian representative to the GAC and has assumed the role of incoming GAC Vice-Chair for a one-year term until March 2020. Ms. Paez is contributing to the capacity development efforts of the GAC Underserved Regions Working Group to enable new and current GAC members to engage in ICANN's activities and policy processes. Prior to managing the Internet Governance Team at ISED, Ms. Paez was responsible for international telecommunications issues, representing Canada at the Inter-American Telecommunication Commission (CITEL) and at the International Telecommunication Union (ITU) to advance development, governance and gender equality.

Before joining ISED, Ms. Paez worked at the Department of Global Affairs Canada coordinating, advancing, and negotiating international policy issues in a variety of capacities. She worked as a Policy Advisor in the International Crime and Counterterrorism Division, as Political Officer for Brazil, and as Political Officer for the Nordic countries, coordinating Canada's bilateral political relations with Norway, Sweden, Denmark, Finland and Iceland.

Ms. Paez holds a Master's degree in Public and International Affairs from the University of Ottawa (2012) and a Bachelor's degree in Political Science from McGill University, Montreal, Canada (2008). She is based in Ottawa and is fluent in English, French and Spanish, and has a working ability in Portuguese.